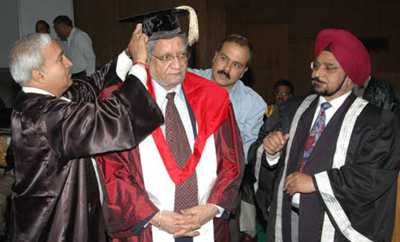 Dr. Naranjan S. Dhalla, Distinguished Professor, University of Manitoba, Winnipeg was honoured by the Panjab University, Chandigarh, India during the 58th Annual Convocation with a DSc (Hon) degree on March 29, 2009. A total number of 678 students received their degrees and about 900 people attended the convocation. Most of the recipients of degrees, medals and prizes were young women. Out of the 493 students who received their degrees, 350 were women and out of 185 medal and prize winners, 149 were women. Dr. R.C. Sobti, Vice-Chancellor, Panjab University, cited Naranjan Dhalla as an internationally renowned personality in the fields of Cardiovascular Science, Medicine and Pharmacology.

Dr. Dhalla obtained BSc degree from the Panjab University in 1957, MSc degree from the Pennsylvania University in 1963 and PhD degree from the University of Pittsburgh in 1965. He served for 19 years as Director of the world famous Cardiovascular Institute at St. Boniface Hospital Research. Dr. Dhalla has published more than 700 papers, which have been cited more than 10,000 times. He has edited/authored 40 books for promoting scientific basis of cardiology and served for 26 years as Secretary-General and President of the International Society for Heart Research. Since 1996, he has been directing his attention to promote the International Academy of Cardiovascular Sciences in his capacity as Executive Director. For the past 22 years, Dr. Dhalla has been Editor-in-Chief of an International Journal “Molecular and Cellular Biochemistry” which is published monthly from New York and Amsterdam.

Dr. Dhalla has received 137 honours and awards including the Order of Canada, Order of Manitoba, Fellowship in the Royal Society of Canada, Medal of Honour in the Canadian Medical Association and Research Achievement Award of the Canadian Cardiovascular Society. Canadian Institutes of Health Research awarded him a Chair in Cardiovascular Research at University of Manitoba and in addition he received several Honorary Professorships and Honorary Degrees from different Universities. He was granted Coat of Arms by the Canadian Heraldic Authority and identified by the Winnipeg Free Press as the “second Greatest Manitoban of all times”. His bust has been installed in the Citizens Hall of Fame in Winnipeg. He is helping the development of Panjab Foundation of Manitoba and India Canada Culture and Heritage Association.