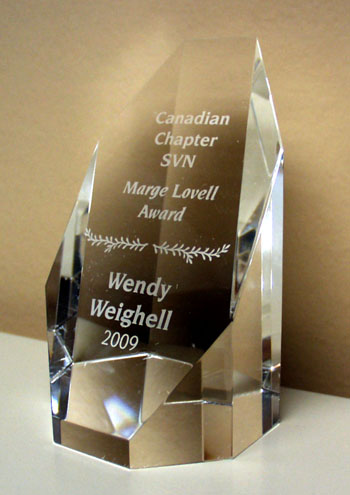 Clinical Research Coordinator Wendy Weighell, RN,  was recently honoured by the Canadian Chapter Society for Vascular Nursing (CCSVN) with the prestigious Marge Lovell Award for excellence in Vascular Nursing.  The award was presented at the Chapter’s annual conference in Ottawa on Sept 25, 2009.  Weighell received the award for  “dedication to promoting awareness of Vascular disease and the specialty of vascular nursing”.

Weighell started the Manitoba CCSVN chapter in 2009, and is involved on the planning committee for national CCSVN conferences.  Her knowledge base, insight, vision and dedication to educating all healthcare professionals, patients, families and the community on the importance of vascular disease, vascular nursing and overall vascular health were cited in her nomination for the award.