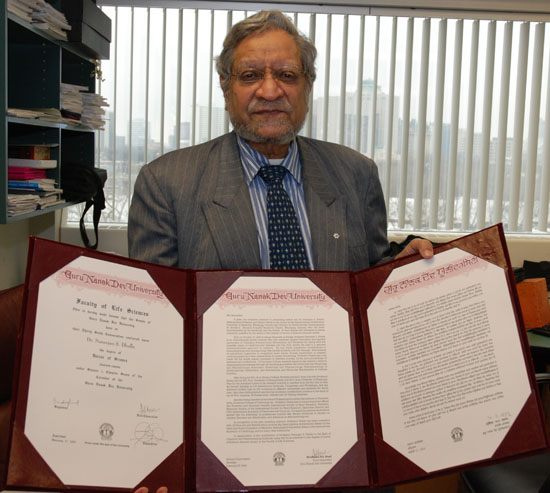 It’s been a busy February for Dr. Naranjan S. Dhalla!

Dr. Dhalla, Distinguished Professor and Director of Cardiovascular Development, was recently given the honour of addressing the 36th annual convocation of the Guru Nanak Dev University (GNDU) in Amritsar, India. In his address, Dhalla encouraged the university to develop a joint research initiative between the department of applied health sciences and the Government Medical College in Amritsar to enhance human health and welfare. The address, given to over 1600 graduates, also touched on issues of social injustice, human dignity, climate change and global poverty. Dr. Dhalla also received an honourary Doctor of Science degree from the university.

Only a few weeks earlier, Dr. Dhalla was elected Honorary Foreign Fellow of the Romanian Academy of Medical Sciences, and Honorary Fellow of the Punjab Academy of Sciences, in recognition for “outstanding research contributions and achievements in the field of Medical Sciences” – an honour received February 7, 2010 during the 13th Punjab Science Congress held in Chandigarth, India.

The GNDU convocation received news coverage in both the Hindustan Times and the Jalandhar Sunday Tribune.