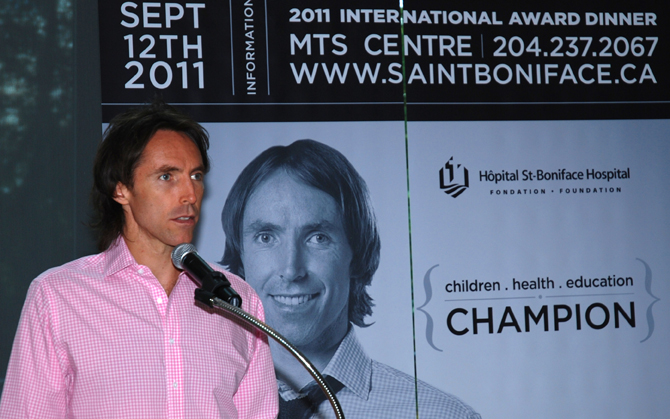 2-time NBA MVP Steve Nash visited the St. Boniface Hospital Research Centre today. Nash is in Winnipeg to receive the St. Boniface Hospital Foundation’s International Award. He is also scheduled to put on a workshop with university athletes this afternoon at the University of Manitoba, and will formally receive his award this evening at MTS Centre.

The Foundation is presenting its 2011 International Award to Steve Nash in recognition of his commitment to improving circumstances and creating opportunities for children living in poverty, or with illness, abuse or neglect. The Steve Nash Foundation also works to provide thoughtful solutions to critical community needs, such as health care and education programs initiatives in Canada, the United States and South America.

Proceeds raised through the International Award Dinner are directly applied to world-renowned medical research and life changing patient care at St-Boniface Hospital. In this way, the Award not only honours outstanding work in health care and/or humanity, but also furthers this work through supporting innovative initiative in Manitoba, and research that benefits the local and global communities.

In the 2004–05 season, Nash led the Suns to the Western Conference Finals, and was named the league’s Most Valuable Player (MVP), and was named MVP again in the 2005–06 season. Named by ESPN in 2006 as the ninth greatest point guard of all time, Nash has led the league in assists and free-throw percentage at various points in his career. He is also ranked as one of the top players in NBA league history for three-point shooting, free-throw shooting, total assists and assists per game.

Nash has previously been honoured for his contributions to various philanthropic causes. In 2006, he was named by Time as one of the 100 most influential people in the world. He also received the Order of Canada in 2007, and was awarded an Honorary Doctor of Laws by the University of Victoria in 2008.