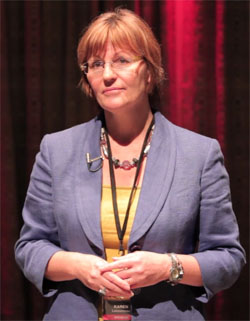 Every year in Manitoba, between 4 and 6 babies were dying due to an abnormality in their heart that wasn’t detected. Their heart problem wasn’t picked up prenatally during a routine ultrasound, or before they left the hospital.

Karen Létourneau, an assistant charge sonographer in the ultrasound department at St. Boniface Hospital in Winnipeg, Manitoba, is the principal investigator in a six-year research project, “Sonographic Fetal Heart Screening in Manitoba”, which has allowed expecting mothers to better prepare for the arrival of their baby – and in many cases avert severe complications or even death.

“What we did was improve the basic screen that we were already doing, all across Manitoba. We only asked of ourselves to do the basics – better.” says Létourneau. “We have to be vigilant, all the time, expecting that in every single obstetric exam there could be an abnormal heart. Since we started doing this, not one baby has died. We are saving lives.”

Létourneau is a five-time winner of the “Excellence in Ultrasound” award, a national competition organized by the Canadian Society of Diagnostic Medical Sonographers and has been invited to speak at numerous national ultrasound conferences and at Provincial Ultrasound rounds every year since 2001. Karen has also been published in Canadian, American and British medical journals. Karen worked as a radiology technologist for 20 years before pursuing ultrasound in 2000.