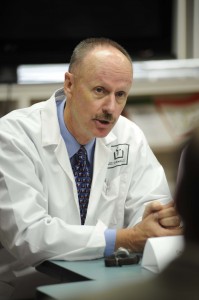 Eating flaxseed was associated with reduced blood pressure in people with hypertension, according to a University of Manitoba study conducted at St-Boniface Hospital Research and presented today at the American Heart Association’s Scientific Sessions 2012 in Los Angeles.

A research team led by Dr. Grant Pierce, Principal Investigator with the Canadian Centre for Agri-food Research in Health and Medicine (CCARM), studied 110 hypertensive patients with peripheral artery disease, which is strongly associated with high blood pressure. They sought to determine if adding 30 grams of milled flaxseed each day for six months would lower blood pressure, and compared their findings to a similar group of people who added a placebo to their diets.

“These anti-hypertensive effects of flaxseed are amongst the most potent ever observed,” Pierce said. “The change in blood pressure from flaxseed could result in about a 50 percent reduction of strokes and 30 percent less heart attacks.”

Dr. Grant Pierce is Executive Director of Research, St-Boniface Hospital, and Professor of Physiology, Faculty of Medicine, University of Manitoba.

The Canadian Centre for Agri-Food Research in Health and Medicine represents an ongoing unique partnership between St-Boniface Hospital, the University of Manitoba, and Agriculture and Agri-Food Canada, and is located within the St- Boniface Hospital Research Centre and the I.H. Asper Clinical Research Institute.