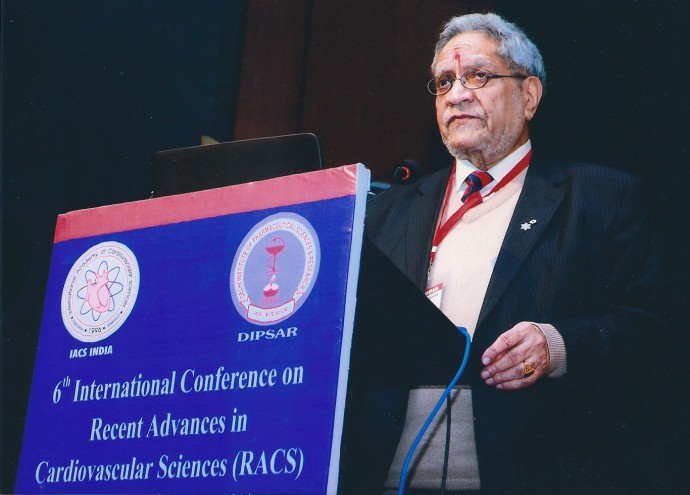 It has already been a busy start to 2014 for Distinguished Professor Dr. Naranjan S. Dhalla. And not surprisingly, it’s about to get a lot busier with no end in sight – and that appears to be just the way he likes it. “What else would I do?” he reflects. “This (travelling and speaking internationally) has become my life”.

In late January, Dhalla was guest of honour and keynote speaker at the 5th National Conference on Rational Pharmacotherapeutics in Ludhiana, India, presenting “Search for Rational Therapy or Prevention of Sudden Cardiac Death”. Shortly after, at the International Academy of Cardiovascular Science’s India Section Meeting in New Delhi, Dhalla gave the presentation “Role of Protease Activation in Ischemia-Reperfusion Injury in the Heart”. During this visit, Dhalla also received a Lifetime Achievement Award of the Indian Section of the International Academy of Cardiovascular Science. 7 awards were also given in his name – the Naranjan Dhalla Awards for Young Investigators – for 2 oral and 5 poster presentations.

In early February at the 101st Session of Indian Science Congress in Jammu, India, Dhalla presented “Modification of Myocardial Infarction Induced Heart Failure by Anti-platelet Agents”. The Prime Minister of India, Dr. Manmohan Singh, presented an award to Dr. Dhalla in recognition of his exemplary contributions in science and technology. The award was received in the presence of 8,000 conference delegates, and chaired by Dr Ranbir Sobti, General President, and Mohan P.S. Ishar, President.

After a few days rest Dhalla then presented “Reversal of Cardiac Remodeling in Heart Failure by α-adrenoceptor Blockade” at the11th Annual Conference of ISHR-India Section in Mohali, India. At this meeting, a Naranjan Dhalla Young Investigator Competition was also held.