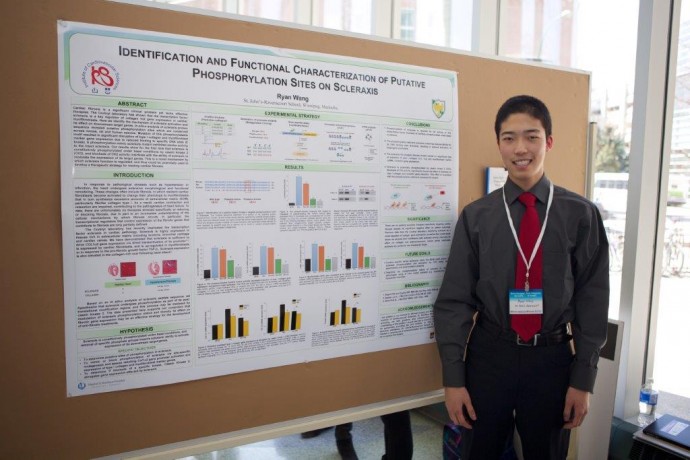 In his first-ever science fair, student Ryan Wang took both the Genome Prairie Genomics Award and first place overall in the SBCC Achievement Awards at the annual Sanofi BioGENEius Challenge Canada (Manitoba Chapter). Ryan is a grade 12 student from St. John’s-Ravenscourt School who volunteers in the Czubryt lab (Molecular Pathophysiology) within the Institute of Cardiovascular Sciences at St. Boniface Hospital Research Centre. Ryan will now compete in the National Competition to be held May 22, 2014 in Ottawa.

Wang’s work on the project, “Identification and functional characterization of putative phosphorylation sites on scleraxis”, underpinned a patent application that was filed earlier this week. “I’m very pleased to see his hard work pay dividends. He put tremendous effort into mastering the many skills that went into the project, spent countless hours in the lab, and really studied the literature to get a firm understanding of the field” says Dr. Michael Czubryt.

Czubryt and Rushita Bagchi, a PhD student in his lab, both received Mentor Awards from Sanofi BioGENEius Challenge Canada.

The Sanofi BioGENEius Challenge Canada (SBCC) is a national competition that has aimed to expose students and teachers to biotechnology for the last 20 years and fosters the development of the next generation of scientists in three areas of this new science: health, agriculture and the environment.

Ryan joins many youth across Canada who, through the SBCC, have had the opportunity to advance their scientific ideas. Guided by mentors, these young people have the opportunity to make innovative ideas real, and tackle some of the world’s most urgent challenges – ranging from diabetes, cancer and Alzheimer’s disease to eco-friendly pesticides, anti-aging products and environmentally friendly solutions to systemic problems. In fact, many of these ideas have resulted in patented, commercialized products. Examples from Manitoba include:

UPDATE!
Ryan Wang went on to do very well in the Manitoba Schools Science Symposium. He was awarded a Gold Medal, was selected as the Best Senior Level Individual Biological Sciences Project, and will be going on to represent Manitoba at the Canada-Wide Science Fair in Windsor, ON, May 10-17.