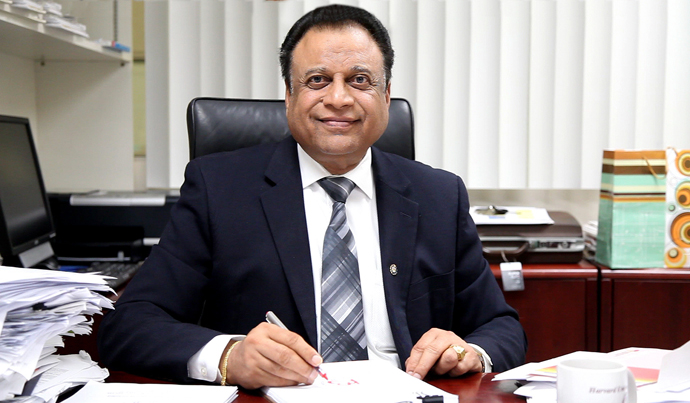 Dr. Pawan Singal, cardiovascular researcher and director of the Institute of Cardiovascular Sciences, has made The Indian Diaspora’s “A-List” (Canadian edition) – a publication recently presented to Prime Minister Stephen Harper.

Produced by veteran Indo-Canadian journalist Ajit Jain, the list contains biographical information on 41 Indo-Canadians from varied fields, “who have gained name and fame for themselves and in the process given name and fame to the community and to their adopted homeland Canada”. The list was presented in a ceremony on February 3. Also attending the ceremony were Ministers Jason Kenney (Employment, Social Services and Multiculturalism), Ed Fast (International Trade) Bal Gosal (Minister of State, Sports), and MP Nina Grewal, Surrey (British Columbia).

Dr. Singal joined the Physiology & Pathophysiology Department at the College of Medicine, University of Manitoba, as a lecturer, rose through the ranks and has been a Professor since 1990. He served as Associate Dean for the Faculty of Graduate Studies, University of Manitoba. He is also holder of the Naranjan S. Dhalla Chair established by the St. Boniface Hospital Foundation. Internationally known for his work on oxidative stress and heart failure, Dr. Singal has made significant contributions in the understanding of the sequelae of heart failure. He has published 250 papers, has co-edited 30 books and trained more than 100 students, fellows and visiting scientists. He has received more than 80 national and international recognitions. The University of Manitoba has established an award in his name called ‘Pawan K. Singal Award for Graduate Students in Cardiovascular Sciences’. His name has been added to the Wall of Fame in the University Center at the University of Manitoba recognizing his outstanding teaching skills and research.

Dr. Singal is a founding member of the ICS, and has served as director since 2007.

Ajit Jain of The Indian Diaspora, and his wife Rosalinda, in Ottawa for the Canadian launch of The A-List magazine, present Prime Minister Stephen Harper with a copy. Photo courtesy of the Prime Minister’s Office.