Bean portrait “in the Top 5 moments of my life”: Ace Burpee 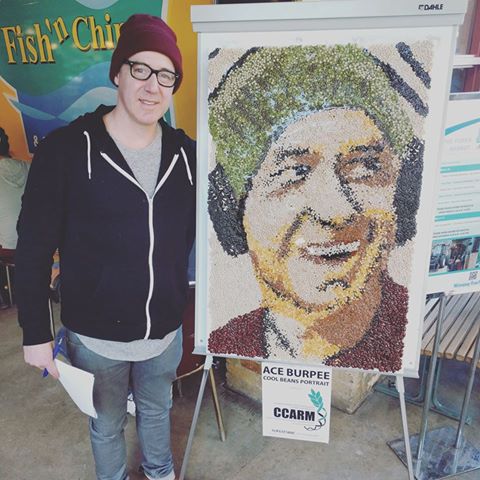 The Canadian Centre for Agri-Food Research in Health and Medicine (CCARM) took part in “Ag in the City”, held at the Forks Market this past weekend. Sponsored by Agriculture and Agri-Food Canada, Ag in the City is an annual two-day event offering “a chance to explore the vibrant and innovative world of agriculture”. This year the event has received an additional promotion, as 2016 has been declared by the United Nations as the International Year of Pulses.

In addition to the popular “Consider the Bean” portrait of Rowan Atkinson (Mr. Bean), CCARM brought along a new pulse portrait of event MC and local radio personality Ace Burpee of HOT 103 FM. The 2-foot by 3-foot portrait, made of locally-grown pulses, was on prominent display next to the Great Manitoba Food Fight – where young food scientists from the University of Manitoba compete for the tastiest and most marketable food product.

Excerpt from the Winnipeg Free Press:

Before the judging began, I asked Ace how he felt about having the Canadian Centre for Agri-Food Research in Health and Medicine immortalize his mug in beans.

“It was the realization of a dream I didn’t know I had,” Ace laughed as we eyeballed the bean-intensive masterpiece. “I’d have to rate this in the Top 5 moments of my life.”