Foerster, Torchia to be inducted to St. Boniface Hospital Research Hall of Fame 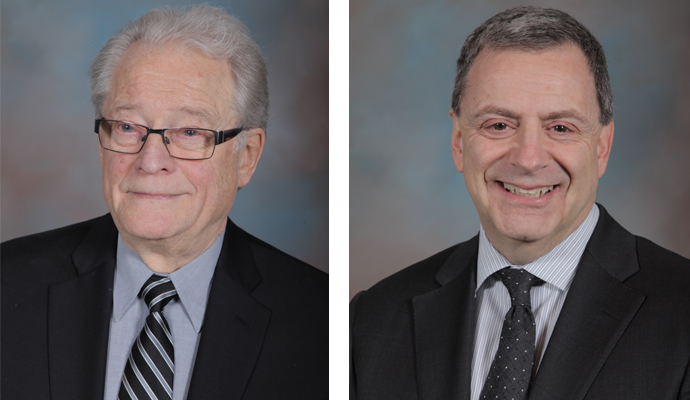 Dr John Foerster, a Professor at the University of Manitoba, Faculty of Medicine and specialist in hematology and oncology, was the first Executive Director of Research at St. Boniface Hospital. He was recruited to raise teaching and research to higher levels of excellence and productivity, and by his retirement in 2006 Foerster had guided the Centre’s growth to more than 190 research and support personnel with a budget of over $7,000,000. Under his leadership, St. Boniface Hospital opened the Centre for Research on Diseases of the Aging in the Research Centre in 1998, which now bears his name. Foerster received the 2006 Distinguished Alumni Award from the University of Manitoba for his contribution to the University, the medical profession, and advancing medical research in the province. He also received the St. Boniface Hospital Foundation’s International Award in 2006.

Dr Mark Torchia began his career at St. Boniface Hospital as a Principal Investigator in the Department of Surgery laboratory, eventually leading the R.O. Burrell Surgical Research Facility and directing the Department of Clinical Research. He developed and co-developed two novel medical devices and techniques that evolved into two successful biomedical spin-off companies – Monteris Medical Ltd. and Intelligent Hospital Systems (IHS). For his work in developing the Monteris NeuroBlate system – which combines robotics and laser technology to treat patients with brain tumors – Dr. Torchia won both the prestigious 2015 Ernest C. Manning Innovation Principle Award for improving the lives of Canadians and the world, and more recently the Governor General’s Innovation Award, which celebrates outstanding Canadian individuals, teams and organizations who contribute to Canada’s success.

Drs Foerster and Torchia will be inducted as the 3rd and 4th members of the Hall of Fame. Previous inductees are Dr. Naranjan Dhalla and Dr Leslie Degner.

“We congratulate these two distinguished alumni, who are exemplary researchers and teachers, on their leadership and pioneering research endeavours,” said Dr Digvir Jayas, Vice-President (Research and International) and Distinguished Professor at the University of Manitoba. “Both are medical researchers who have advanced knowledge in their fields, resulting in improved healthcare for Manitobans and Canadians.”

The St-Boniface Hospital Research Hall of Fame was established in 2011 to honour the achievement of St-Boniface Hospital scientists and builders who have produced important contributions to medical research; specifically those who have made direct advancements to the knowledge of disease processes and health care. Inductees are recognized with plaques permanently installed within the large pillars prominent within the St. Boniface Hospital Albrechtsen Research Centre Atrium.