Journal selects “Image of the Week” from Czubryt 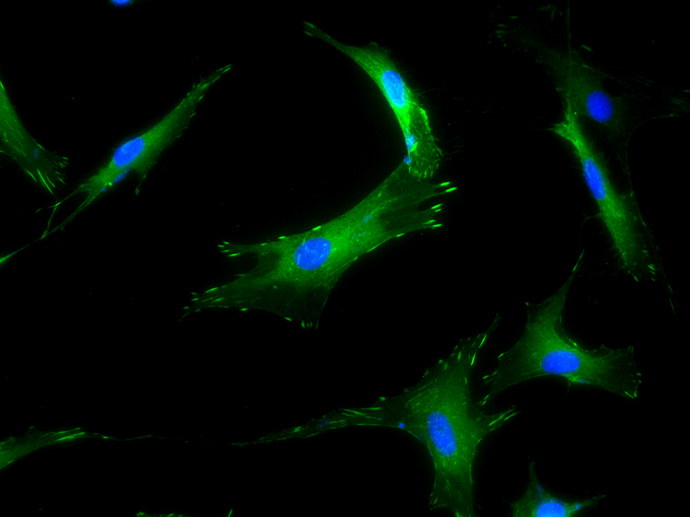 The American Journal of Physiology – Cell Physiology has selected the above image as “Image Of The Week”, which comes fromDr. Michael Czubryt’s laboratory.

“Physical stress forces tend to rise in the diseased heart, for example, during high blood pressure. In turn, such forces cause pathologic changes to the heart, including promoting the conversion of cardiac fibroblasts into myofibroblasts, which secrete high levels of proteins like collagen that serve to stiffen the heart and resist these forces. Unfortunately, this increased stiffness (“cardiac fibrosis”) makes it harder for the heart to do its job, leading to heart failure. However, since we do not really understand the underlying mechanisms, we do not have any treatments to prevent these changes. We have previously shown that the protein scleraxis directly regulates the genes involved in cardiac fibrosis. In this paper, we demonstrate that physical force (cell stretch) requires scleraxis to facilitate the fibroblast to myofibroblast conversion process. We also show that simply adding scleraxis to cells mimics the effect of stretch.

“In this image, we show that scleraxis causes an increase in the level of a protein called vinculin (green stain), particularly in small points at the cell edge called focal adhesions – a hallmark of cells that have converted to myofibroblasts. In effect, this cell is attaching more firmly to its surroundings via these focal adhesions in preparation to make more collagen proteins. The blue stain shows the cell nucleus. Our work highlights scleraxis as an excellent target for the development of medications to combat fibrosis.”