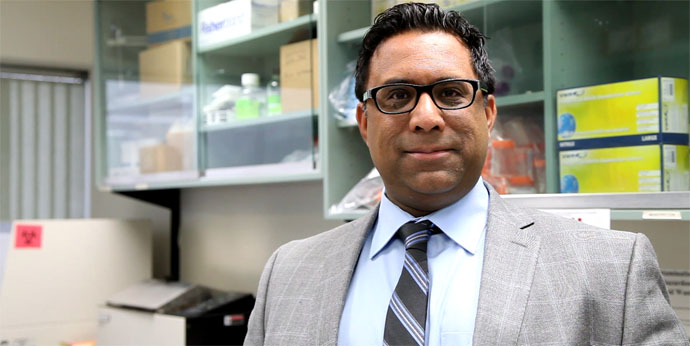 Dr. Arora is the principal investigator of the Heart Failure Therapy laboratory in the Institute of Cardiovascular Sciences, as well as associate professor of Surgery, Anaesthesia & Physiology, University of Manitoba.

Arora joined the Cardiac Sciences Program as a staff surgeon in October 2006 with an academic appointment at the University of Manitoba. He has been cross appointed in the Department of Anesthesia & Perioperative Medicine and the Department of Physiology & Pathophysiology.
Dr. Arora achieved his Medical Doctorate from the University of Toronto in 1996 and obtained his Royal College of Physicians and Surgeons of Canada [RCPS(C)] Fellowship in Cardiac Surgery at Dalhousie University. During his time in residency at Dalhousie, he completed a Doctorate of Philosophy in the Department of Anatomy/Neurobiology in the field of neuroradiology. He then went on to two years of training at the University of Calgary, where he became the first Cardiac Surgeon in Canada to also complete a RCPS(C) in Critical Care Medicine.

He has been an independent researcher since 2006 and has numerous grants and publications. He was appointed the Director of Research for the Section of Cardiac Surgery in 2007 and the Associate Director of Research for the Department Surgery in 2015 and was promoted to full Professor in the Max Rady Faculty of Medicine in 2016. In 2010 he was appointed Co-Medical Director of ICCS and in 2015 took on the sole role of Medical Director, ICCS. He is also the Co-Founder and Chair of The Canadian Cardiovascular Cardiac Critical Care Society (CANCARE). He is a Past President of the American Delirium Society.