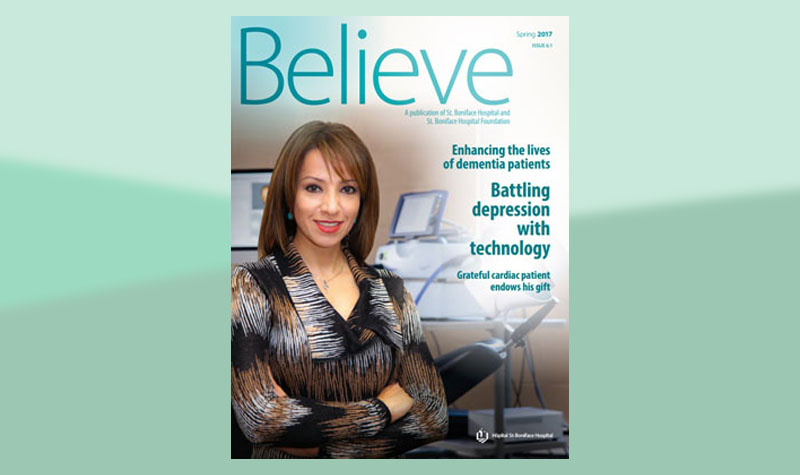 The Spring 2017 issue of Believe highlights a partnership with Israel’s Ben-Gurion University of the Negev, cutting edge depression treatment technology, and a patent for controlling the production of collagen in the heart:

Ben-Gurion University partnership
“I believe we’re a team,” says Chuck LaFlèche, St. Boniface Hospital Foundation’s President & CEO, of the charity’s emerging relationship with Ben-Gurion University of the Negev (BGU) in Beer-Sheva, Israel. “We have common research interests, similar approaches to fundraising, and – above all – a commitment to making people’s lives better.” The “Research Without Borders” initiative was officially launched in September 2016 at the St. Boniface Hospital Albrechtsen Research Centre. The guest list included Professor Rivka Carmi, President of BGU, and Mark Mendelson, the Montreal-based National CEO of the Canadian Associates of Ben-Gurion University of the Negev.

Dr. Michael Czubryt obtains Scleraxis modulation patent
Issued in January 2016, that patent is on a particular way to interfere with scleraxis, a protein related to collagen production – needed to create a “soft skeleton” in the heart to give it the strength to handle 100,000 daily beats. Too much collagen, however, and cardiac fibrosis can occur, affecting the heart’s performance. Controlling the production of collagen by manipulating scleraxis is what Dr. Czubryt and his colleagues are trying to do.