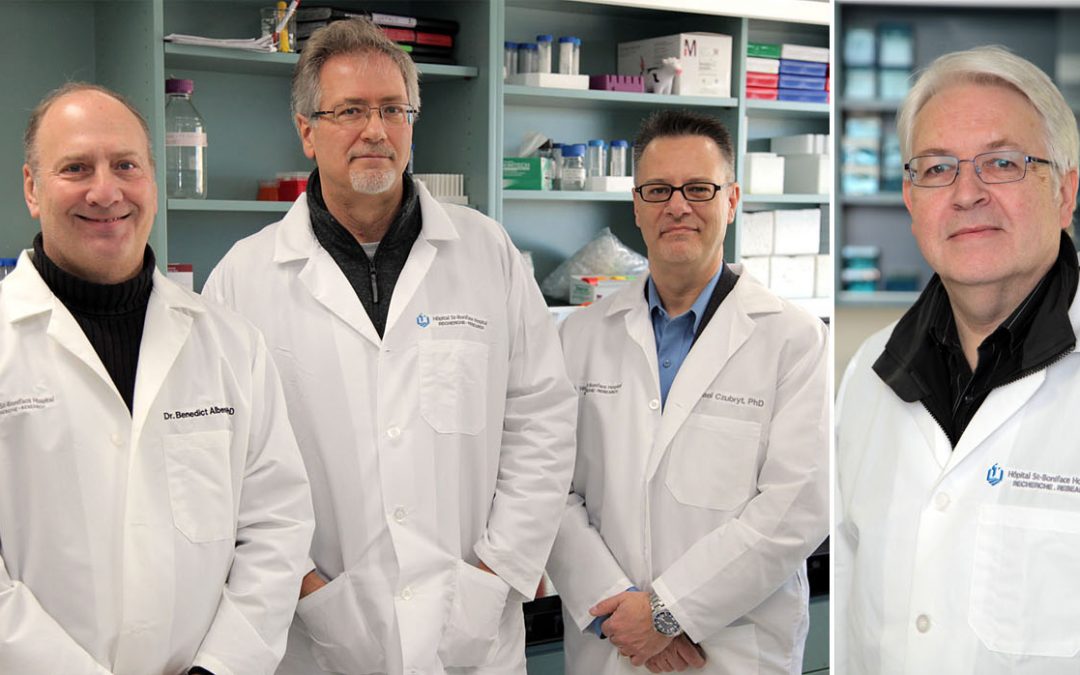 In an impressive demonstration of successful funding applications, four Principal Investigators at St. Boniface Hospital Research have been recognized by the Canadian Institutes of Health Research (CIHR) for outstanding efforts in their respective fields of study and will receive financial support totalling more than $3.5 million over the next five years.

“The average scientific research funding rate across the country is only about 15%, so we are well above the national average,” said Dr. Grant Pierce, Executive Director of Research at St. Boniface Hospital. “It’s a very competitive landscape, with hundreds of applications from institutions across Canada entering these competitions every year, so this is an outstanding testament to the fact that we have some of the best researchers in the country.”

The Projects and their Goals

Women have a higher risk of acquiring Alzheimer’s disease (AD) and it’s not known why. Differences in cellular mechanisms (genetics, metabolism), hormonal changes, and/or lifestyle factors between men and women may be at the root cause, but no one knows for sure. This study aims to bring a clearer picture into view of the biological processes underway in the onset of Alzheimer’s disease.

Cardiac fibrosis is a stiffening of the heart caused by many forms of heart disease. Fibrosis dramatically increases the risk of death and disability independently of other risk factors (up to 17 times), yet no treatments for cardiac fibrosis are available to patients. Czubryt’s laboratory has identified a protein (scleraxis) as a powerful cause of fibrosis, and initial data indicates that interfering with scleraxis can reduce fibrosis. This study will further probe this relationship in the hope of finding new treatments for fibrosis.

“This new investment in our work means that we can recruit additional people to do research in the lab, including new students, and significantly increase the pace of discovery towards new treatments for cardiac fibrosis to help Canadians,” said Dr. Czubryt.

Czubryt shared that this funding will allow his team to investigate the mechanisms by which some currently-approved medications show beneficial effects on fibrosis – studies that are critical to being able to re-direct these medications to combat fibrosis as front-line treatment.

“We will also test the ability of a novel gene therapy developed in our lab to treat and reverse cardiac fibrosis, he added.

Czubryt expressed his gratitude to lab members past and present that have helped drive forward the research conducted to this point. He was particularly appreciative for the support he’s received from funding bodies such as CIHR, the St. Boniface Hospital Foundation, and the contributions of colleagues at St. Boniface Hospital Research and the University of Manitoba.

“And I definitely need to thank my wife and son who provide incredible support and understanding at home – including going without vacation last year as I worked on developing this project!” he said.

Project: Ski is a negative regulator of cardiac fibrosis
Funding: $684,675

Patients surviving a heart attack or those with hypertension develop chronic heart disease. These patients make too much collagen in their heart muscle, wherein non-muscle cells called myofibroblasts secrete excessive collagens, which stiffens the heart. Too much collagen leads to cardiac fibrosis, which results in weak muscle contraction and relaxation. There is currently no treatment for cardiac fibrosis or any specific cardiac drugs approved to fix cardiac fibrosis.

In recent years Dixon’s work found a new protein called Ski which turns off this over-deposition of matrix in diseased heart cells and made progress on how Ski actually achieves this positive change. His lab is now poised to extend its understanding of how Ski corrects cardiac fibrosis and this study aims to bring about the design new Ski-based therapies to treat cardiac fibrosis for the prevention of heart failure.

Dr. Dixon is grateful for this funding, “Since the early 90’s our lab has been interested in finding ways to slow cardiac fibrosis and the associated progressive loss of heart function in heart disease.  Ultimately we want to find new ways to coax proteins already present in cardiac cells to provide effective treatment for heart failure.”

With an injection of this magnitude from CIHR, Dixon anticipates the next five years of work will allow his lab to prove the efficacy of Ski’s beneficial actions to quell heart disease and therefore bring Ski to the fore as a molecule whose structure can be exploited to facilitate new drug development.

“My lab-mates continue to inspire and motivate me with their insights and commitment, and I would also like to thank my wife and children for their unwavering support,” he added.

Objective Diabetic sensory neuropathy and chemotherapy-induced peripheral neuropathy (CIPN) are neurodegenerative diseases characterized by loss of nerve fibers in the skin. Both diseases cause significant pain and eventually lead to sensory loss. The impact of these diseases on human health is enormously damaging and there are no therapies. Recent work in Fernyhough’s lab has uncovered an endogenous signaling pathway in neurons that negatively modulates nerve fiber growth of sensory neurons. This study will enable the lab to broaden in scope and permit this therapeutic approach to be performed in a wide range of distal dying back neurodegenerative diseases.

“The funding allows a 10 year project to keep developing in the area of drug discovery for neurological disease. Phase 2 clinical trials are underway, however, we are still unclear as to the basic neurobiology underpinning the action of several drug classes we are studying,” Dr. Fernyhough explained.

His hope is that if the studies are successful, they will aid in understanding the mechanism of action of antimuscarinic drugs and their ability to drive nerve repair in a variety of diseases.

“Next steps involve the development of a range of transgenic mouse strains that will permit interrogation of role of G protein coupled receptors, including the muscarinic receptor, in controlling axonal regeneration under normal conditions and in disease (such as diabetes),” he shared.