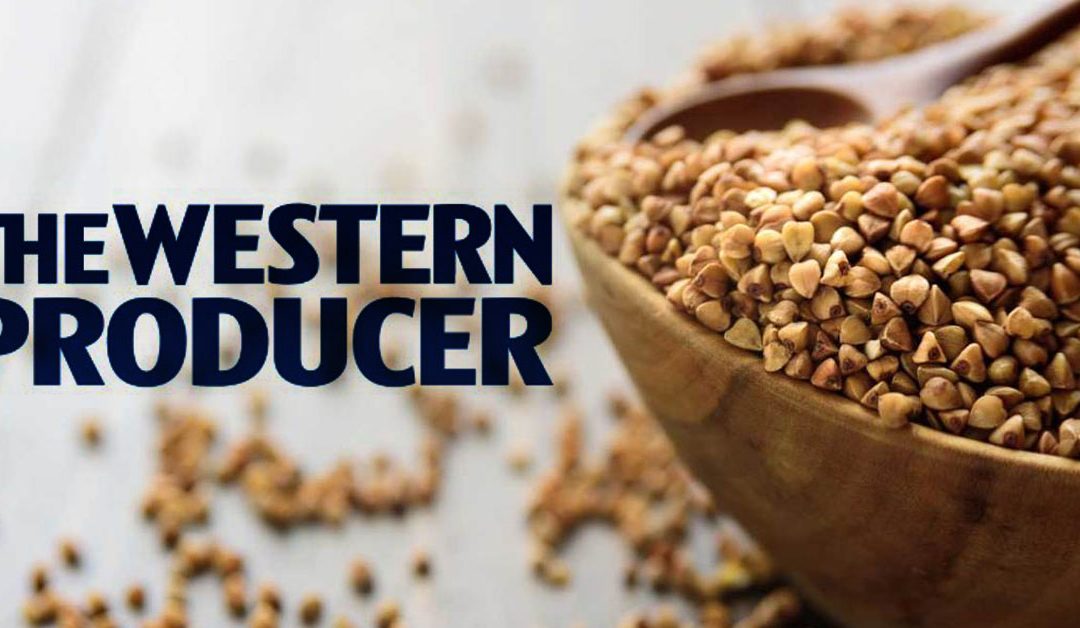 As featured in June 11, 2020 edition of the Western Producer, credit: Robert Arnason.

After years of minimal acres and a lack of enthusiasm, there are positive signs for Manitoba’s buckwheat industry.

There are new customers for buckwheat seed, including farmers who grow cover crops, and researchers in Winnipeg are trying to prove that it controls blood sugar in humans.

If it works out as planned, buckwheat will soon be promoted with a health claim — saying it reduces glucose levels and can be used to manage diabetes.

“That’s the game that we’re going for,” said Peter Zahradka, deputy team leader of the Canadian Centre for Agri-Food Research in Health and Medicine at St. Boniface Hospital in Winnipeg.

“If you can get some sort of health claim for it … then more people will want to eat it.”

Zahradka and his colleague, Carla Taylor, have been studying buckwheat for more than a decade, looking at beneficial compounds in the seed.

It hasn’t been an easy task. Canada’s buckwheat sector is tiny, with only 35,000 acres across the country, so research funds are scarce. It’s also been challenging to identify the chemicals that control blood sugar.

“One of the biggest difficulties is there are 4,000 to 6,000 different compounds in a seed,” Zahradka said.

Taylor has been at this for a while.

She did studies on buckwheat in the early 2000s and concluded it could be a safe and inexpensive way to lower blood glucose.

“Buckwheat won’t cure diabetes, but we’d like to evaluate its inclusion in food products as a management aid,” she said to www.webmd.com in 2003.

Anecdotal evidence about buckwheat goes back much further.

“Many cultural groups have been using buckwheat to help with glucose lowering, or diabetes,” Zahradka said.

One of the big questions for Taylor and Zahradka is about dose.

How much buckwheat is needed to lower blood sugar?

“The amount of the compound (might be) too low to use it in a food. But you can increase the amount and you can enrich it by getting the right fraction, to use as an ingredient,” Zahradka said. “Or possibly to go into a supplement. To help people control their blood glucose.”

The scientists have collaborated with Springfield Mills, a Manitoba company that produces, processes and sells buckwheat seed, to amplify the beneficial compounds in buckwheat seeds.

Together, they have developed varieties with higher levels of “bioactives.”

“We’ve been testing different breeding lines for them,” said Taylor, a professor in Food and Human Nutritional Sciences at the University of Manitoba. “To use our results, to help inform the (plant breeding).”

Achieving a health claim is critical for growers and the buckwheat sector, said Lorne Kyle of Springfield Mills.

For years, Canadian growers relied upon exports to Japan, where buckwheat is used to make soba noodles. But sales have dried up, partly due to logistical problems.

Several years ago, Springfield Mills sold a shipment of Manitoba buckwheat to a Japanese customer. It was shipped by rail to Vancouver and then put into containers.

It took seven weeks for the railways and shipping firms to get the buckwheat to Japan.

“They (the Japanese) took it. In correspondence they said we like your product, we don’t like your service,” said Kyle, who’s in his early 80s and has been part of the buckwheat trade since the 1970s. “And we’ve never been able to do business with them again.”

With Japan on the backburner, the industry needs to focus on North American consumers, Kyle said.

“Buckwheat is something that’s unknown for what it could be used for…. We have to (increase) the usage.”

A health claim for controlling blood sugar and diabetes could make a huge difference. But Taylor and Zahradka aren’t there, yet.

The scientists have done laboratory tests at the cellular level. They’ve studied the chemical compounds in buckwheat and how they affect the processing of glucose.

The next step is animal trials to see if buckwheat controls blood sugar in mice.

That should provide some guidance about dose.

“That would give the information we need, to tell anybody who wants to manufacture a functional food using buckwheat… how much has to be in that food,” Zahradka said.

“How much needs to be added to it (per) serving.”

If the animal testing is successful, the next step is human trials. Then, asking Health Canada to approve a health claim.

If all goes well, it could take three to five years to get there.

“We got contacted last year (by people) in Prince Edward Island. They wanted four containers of (buckwheat) seed,” Kyle said, explaining the producers were using buckwheat at plow down.

“The seed potato growers down there have problems with nematodes and wireworm. Buckwheat helps control them.”

Buckwheat is also gluten-free, which is boosting sales of buckwheat flour.

The increased demand has pulled prices slightly higher in Manitoba. Last year buckwheat production contracts were around $14 per bushel. This spring they’re at $15.

Manitoba produces most of the buckwheat in Western Canada, with typically 5,000 to 10,000 acres annually. A large portion of the crop is grown in Ontario and Quebec.