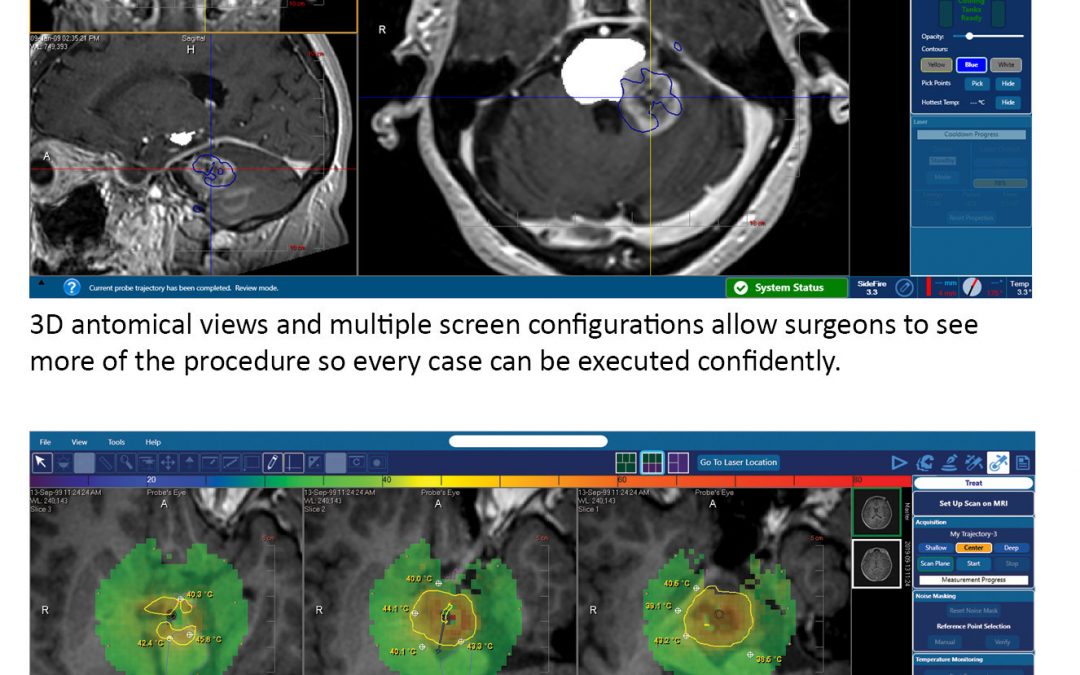 Monteris Medical announced that it has received FDA clearance of its NeuroBlate Fusion-S Software and released the product commercially. This latest innovation for the NeuroBlate System has now been used in over 200 cases. Fusion-S Software provides unprecedented visualization for neurosurgeons to ablate brain tissue, including tumors and epileptic foci. With this advancement, Monteris extends its long-standing leadership in laser ablation in the brain.

Innovations to the Fusion-S software display provide a highly intuitive and detailed visual representation of critical anatomical detail, allowing neurosurgeons to more easily view brain structures throughout the procedure. Three dimensional views available with Fusion-S offer an advanced graphical interface to optimally define lesion anatomy. Fusion-S software also builds upon the established safety features of the NeuroBlate System, including an unlimited number of temperature pick points, which can be set at any location in the three-dimensional ablation zone to closely monitor ablation progression and avoid eloquent structures of the brain. Procedure time can also be reduced with the new software through fewer workflow steps.

“Monteris continues to innovate in ways that are meaningful for neurosurgeons and our patients,” said Dr. Brian Williams, a neurosurgeon at the University of Louisville in Louisville, Ky. “The launch of Fusion-S software represents a significant leap forward for the broader field of laser ablation for the brain. The views I have with this software offer a level of precision that is so critical for every procedure.”

Martin J. Emerson, president and chief executive officer of Monteris commented, “We are thrilled with the positive feedback we’ve received from our neurosurgeon users on Fusion-S software. With this launch, our team continues to deliver the highest caliber technology to strengthen our leadership position in image-guided laser ablation for the brain.”

The NeuroBlate System utilizes robotically controlled laser thermotherapy that directs an MRI-guided laser to ablate unwanted tissue in the brain where the lesion, or abnormal tissue, originates. Unlike traditional brain surgery, a procedure with the NeuroBlate System does not require a large opening in the skull. Instead, surgeons create a small hole in the skull, about the diameter of a pencil. While the patient is in the MRI machine, the doctor guides a small laser device (probe) through the hole and into the lesion. The precise nature of the procedure helps to lessen the likelihood of harm to nearby healthy brain tissue. When compared to other current treatments for brain lesions, laser ablation has been shown to be a safe, cost-appropriate procedure in which patients experience short hospital stays, minimal pain, low readmission rates, low rates of complications, short recovery and improved quality of life.

To date, over 3,000 procedures have been performed with the NeuroBlate System at more than 80 hospitals in the U.S. and Canada.

About Monteris® and the NeuroBlate® System
Monteris Medical is a privately held company that develops and markets innovative MRI-guided, laser-based systems to perform minimally invasive brain surgery, commonly referred to as “LITT” (Laser Interstitial Thermal Therapy) or “SLA” (Stereotactic Laser Ablation). Current investors include Versant Ventures, SightLine Partners, Birchview Capital and BDC Capital. The Monteris NeuroBlate System is the only minimally invasive system that enables a robotic interface for the precise and safe delivery of laser energy. The NeuroBlate System is a tool and is not intended to treat any specific disease. Physicians should use their clinical judgment and experience when deciding whether to use NeuroBlate.