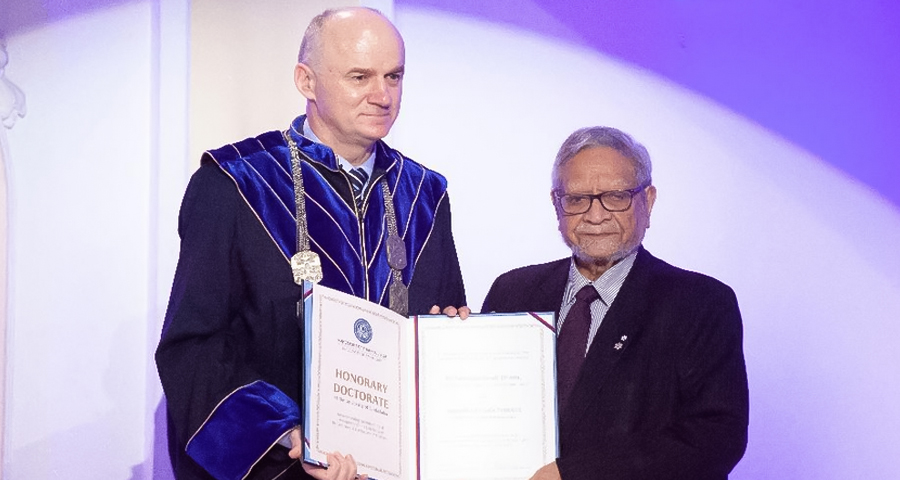 At a colourful ceremony on November 7, 2022, attended by more than 300 dignitaries including the Prime Minister of the Republic of Srpska and several Federal Ministers, the University of Banja Luka in Bosnia-Herzegovina bestowed Honorary Doctorate upon Naranjan S. Dhalla for his outstanding contribution and development of the University and the Faculty of Medicine.

Dr. Dhalla is a senior scientist in the field of Experimental Cardiology at the St. Boniface Hospital Albrechtsen Research Centre and Distinguished Professor of Physiology and Pathophysiology at the Max Rady College of Medicine, University of Manitoba in Winnipeg.  He is the Honorary Life President of the International Academy of Cardiovascular Sciences and Editor-in-Chief of the journal “Molecular and Cellular Biochemistry”.

Dr. Dhalla has received 212 Awards and Honors including 6 Honorary DSc/MD degrees, 2 Professor Honoris Causa and 4 Honorary Professorships from different institutions worldwide.  He has been inducted into the Canadian Medical Hall of Fame in London Ontario and Citizen Hall of Fame in Winnipeg.  He has edited 65 books and published 864 research papers and review articles; his work has been cited more than 32,850 times with an h-index of 84.

“We are tremendously proud of Dr. Dhalla’s many accomplishments and congratulate him on receiving this prestigious honour from the University of Banja Luka”, said Dr. Lorrie Kirshenbaum, Director Institute of Cardiovascular Sciences.